I first made this ginger tahini green smoothie from desperation more than anything else. Well, desperation is too strong a word, but I was out of peanut butter and really wanted to have some kind of a butter in my green smoothie. I wondered for a second if it would throw the whole drink off with its bitterness – in all the combos I’ve seen tahini has never featured – and then I thought what the heck, worst case scenario this’ll be the first and last time. I blended it up with spinach, a banana, a little milk and water because I didn’t want things too creamy, and was amazed at how deliciously it turned out! It’s been my go to combo the last couple months, with the addition of ginger to make things just a little spicy.

Tahini is a completely alien ingredient in The Bahamas, and it’s only from the desire to make my own hummus, and looking around for different salad dressings, that I discovered it at all. On its own it always seemed too bitter, but over the course of this year I’ve surprised myself by venturing into using it as a dip for carrot sticks, and now in this ginger tahini green smoothie!

Aside from being obsessed with this smoothie, I can’t get over one spectacular tree on a street named Village Road. It’s just a block away from the school where I spent my entire childhood – kindergarten, primary and high schools – so I grew up seeing it on a daily basis. I think back then I just used to want to climb it, but lately I’ve become so enamoured. We don’t have a lot of trees this size around, and the ones we do have are mainly silk cotton – another beautiful species. I love when I have to drive down this road, because that means I get to see this tree in all its summer glory. (Never mind the fall weather in other parts of the world, our temps have cooled to the high 80s!) 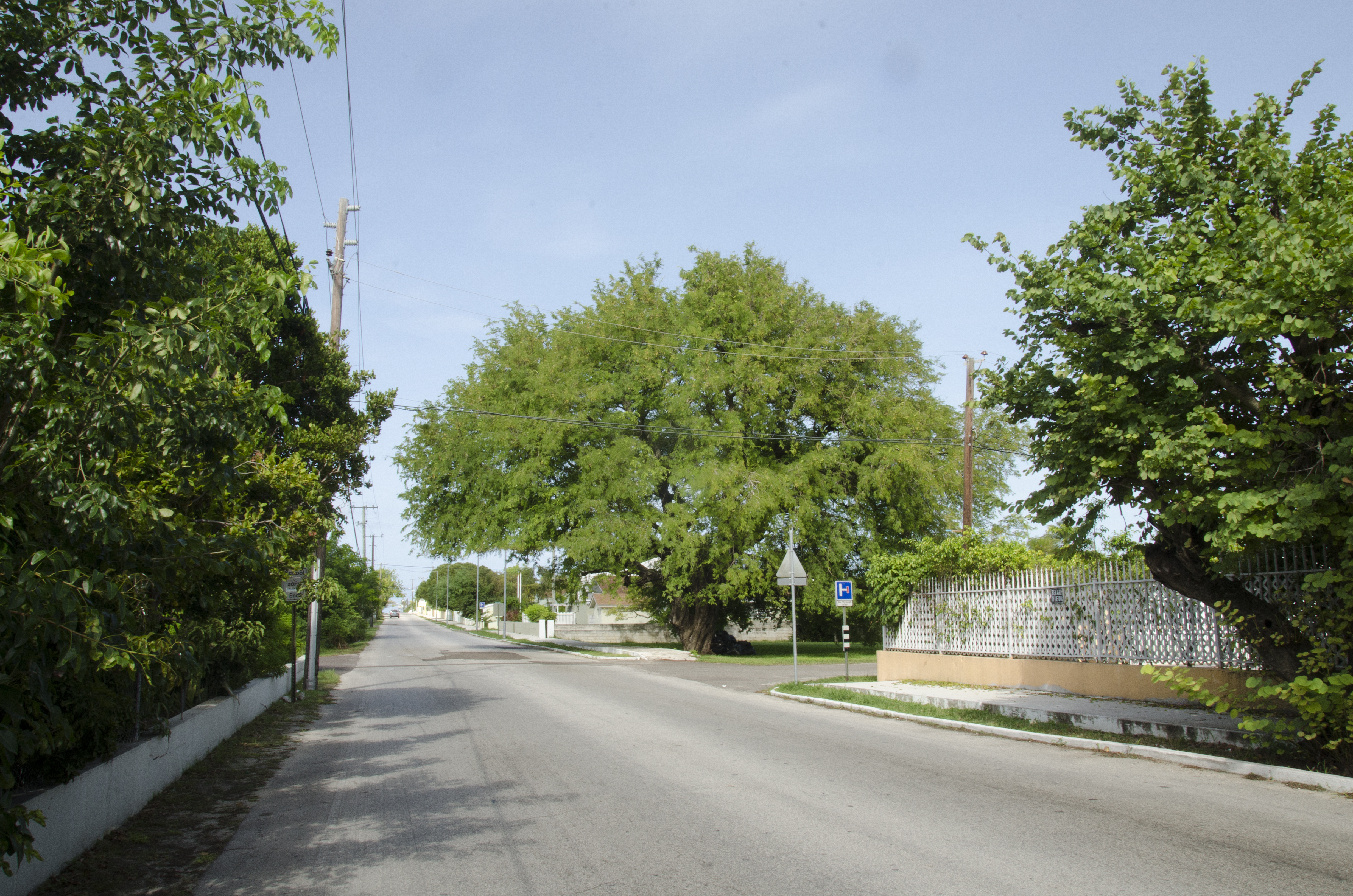 I know a fair amount about our local vegetation, but I have no clue what kind of tree this is. If you do, please tell me in the comments! Also, don’t be fooled by the semi-deserted look of this street. Village Road is fairly busy on weekdays, since, aside from being the home of a major local school it’s one of the streets that connects the northern and southern parts of New Providence. I went out on a late Saturday afternoon to get these shots to avoid having to deal with the traffic.

Unless you already live in New Providence, or are coming for a visit, you won’t be able to see this gorgeous tree. The ginger tahini green smoothie, however, is well within your grasp. Making it couldn’t be simpler. Combine a packed cup of spinach and a frozen banana along with the ginger, tahini, milk and water in your blender. Mix things up till they’re smooth, and enjoy!

The smoothie is subtlely sweet and creamy from the banana, with a mellow, toasty flavour from the tahini and a little kick from the ginger. If you’re not familiar with green smoothies, don’t worry about the spinach, you won’t be able to taste it at all. This recipe will make you one tall glass. Get on it!

I’m Gabrielle, and you know how they say breakfast is the most important meal of the day? I like mine with a side of recipes. I can’t contain my enthusiasm in the kitchen, so this space is for me to share my adventures with you. Read More…

These beautiful pink flowers sprung up in my neigh

One thing I’ve noticed travelling solo is how ea

When you’re building a business it’s easy, too

Scotland is 𝐬𝐨 beautiful y’all. I went out

What’re your hobbies? Reading’s one of mine! I

This error message is only visible to WordPress admins

Error: Access Token is not valid or has expired. Feed will not update.